Have you noticed your fuel economy reduces over time? This is because the tyres you’re using on your vehicle are one of the factors that could impact fuel economy.

By law, every tyre on sale is categorised for how economic they are to the environment, which range between A-G (A being the most fuel-efficient and G being the least).

Why tyres are important to fuel economy

Most of the tyre manufacturers produce a range of energy-saving tyres to provide motorists with lower rolling resistance. Subsequently, this should then offer road users better fuel economy without affecting grip.

Fuel efficient tyres combine rubber and filler, which has been designed to resist movement that is undesirable to a tyre. These compounds reduce the weight and the impact of the fuel economy of a tyre.

While ordinary tyres do not put a focus on reducing the friction between the tyre and the road surface, leading to suboptimal fuel economy. Fuel-saving tyres reduce this friction meaning the car needs less fuel to move and there is less wear on the tyres due to this. Save some money on fuel and replacement tyres by purchasing fuel-efficient (low rolling resistance) tyres.

What factors are important

How efficient your tyres are will depend on how you look after your tyres and the types of tyre that you buy. Rolling resistance (influenced by weight, structure and shape of a tread), accounts for around 15% of your overall fuel consumption, thus having a low rolling resistance would allow you to save money.

Moreover, braking distances and wet grip are also a factor in fuel economy. It’s essential that a vehicle can stop just in time on wet roads especially, however harsh braking to vehicles can significantly affect fuel economy, which in turn, would burn a hole in your bank account.

Why switch to fuel-saving tyres

Simply put, they are better for the environment, saving on fuel costs and reducing vehicle CO2 emissions. Good tyre care is also important. Remember to inspect your vehicle at least once a month to ensure that the tyre pressure is in accordance with the recommendations in the vehicle manufacturer guide.

What Is Smart Parking And What Are The Benefits? 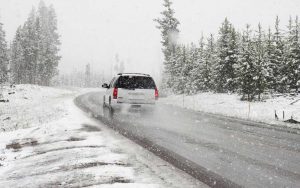 Why Winter Tyres are Beneficial During Conditions Below 7 Degrees Celsius

Safety Tips For Driving In The Snow